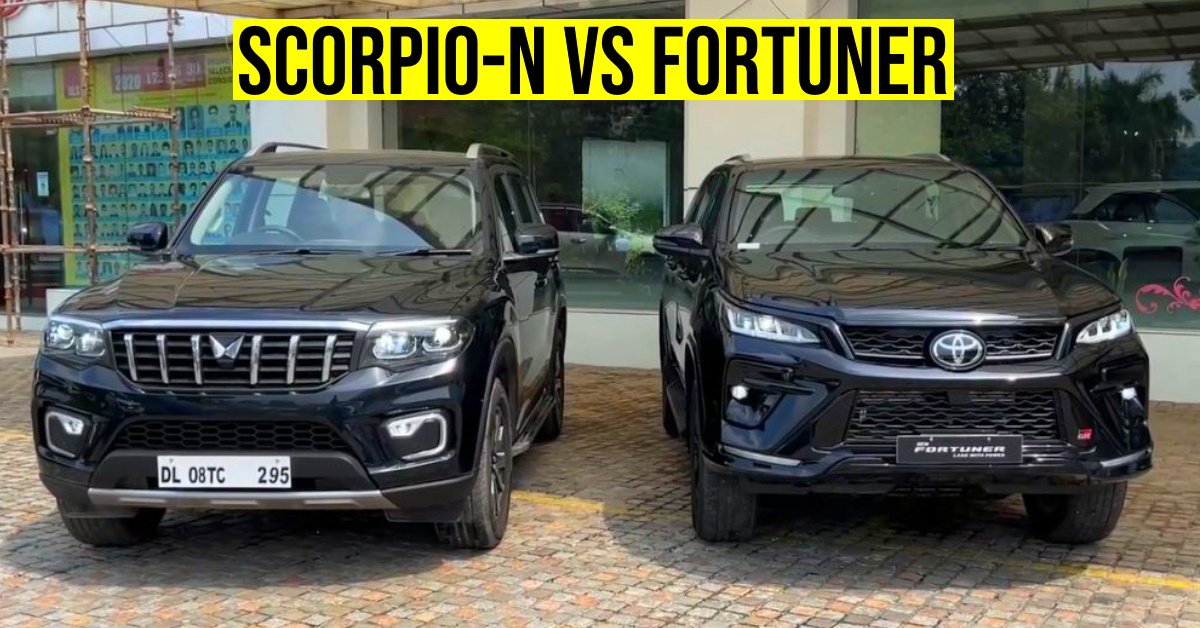 The video was uploaded by Indian Car Guruji on their YouTube channel. In this video, vlogger compares the exterior, interior and features of the two SUVs. Starting with the exterior, the Scorpio N and Toyota Fortuner GR-S feature LED headlights. The Scorpio N has a muscular front end design while the Fortuner has a premium, sporty look. The grille of the Scorpio N is imposing and both SUVs are equipped with LED daytime running lights and fog lights integrated into the bumper. It also gets front parking sensors, but only Scorpio N has a front camera.

The Fortuner GR-S version gets an all-black alloy wheel. The wheel design is the same as the regular Fortuner. The Scorpio N gets a two-tone alloy wheel which goes well with the overall look of the car. Both SUVs have a lower window chrome line. In Fortuner, the chrome line also crosses the rear windshield. As we move to the rear, vlogger felt Scorpio N and Fortuner had nice taillights, but Fortuner’s unit looked slightly more modern.

Vlogger then opens the tailgate and says that Fortuner gets a power tailgate while the Scorpio N does not. Fortuner also offers more trunk space and the third row seats also have a 50:50 split feature. In Scorpio N, the third row is a bench seat. The Scorpio N offers less space for third-row occupants and the second-row seats get a tilting option, one-sided compared to the Fortuner. Scorpio N is also missing on the third row AC vents. Mahindra and Toyota both offer good legroom in the second row and there are dedicated AC vents and USB charging ports for rear seat passengers.

As we move to the front row, Mahindra offers a much more modern and upscale cabin. The cabin layout on Fortuner might look slightly outdated compared to Scorpio N. Mahindra offers a more modern infotainment system with over 70 connected car features. The Fortuner features a larger touchscreen with basic connected car functionality, Android Auto and Apple CarPlay. The instrument cluster on Fortuner looks more upscale while Scorpio N displays more information. Both SUVs offer dual-zone climate control, but only the Scorpio N has a power sunroof. Fortuner has power-adjustable seats in the front while Scorpio N only has a power-adjustable driver’s seat. The Fortuner GR-S is fully upholstered in black leather and suede while the Scorpio N comes with two-tone brown and black interiors.

Also read: 10 DC Design cars and how they look in the REAL world: Maruti Swift to Mahindra XUV500